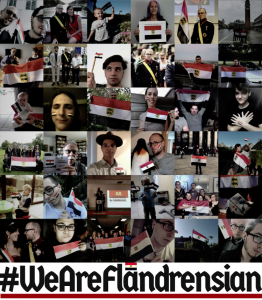 The Grand Duchy of Flandrensis is a micronation that consists of five small islands in West-Antarctica. This first sentence alone already surprises a lot of people and the claims look ridiculous for the majority, but is it?
Flandrensis is not a simulation or a game,  we are not a real country, nor is it our intention to be recognized as a sovereign nation.

Started in 2008, we raise on a creative manner awareness for climate change. As an environmental nonprofit organization we use micronationalism as a creative concept to bring people from different walks of life together.
With the claim to be “The only country in the world that doesn’t want its land inhabited by people”, Flandrensis wants to make a statement to the international community. Representing citizens in more than 70 countries worldwide who are concerned about the current situation in Antarctica, we see it as our responsibility to protest against organizations or countries who harm the Antarctic environment and to support the ones who want to transform Antarctica into one protected maritime area.

The Grand Duchy of Flandrensis is a micronation with claims over some islands in Antarctica, which was founded in 2008. Flandrensis is not recognized by any country nor is it our intention to be recognized as a one. As an environmental nonprofit organization our message is more important than our self-declared sovereignty.

We believe that Antarctica is one of the few places on this planet to remain relatively untouched by humans and we strongly believe that it should remain a nature preserve only available for scientific research well beyond the expiration of the Antarctic Treaty in 2048.

This holiday is for all inhabitants of Flandrensis: happy #WorldPenguinDay 🐧 #Flandrensis #micronations

We are 2 days late with this post, but this doesn't mean that we have not celebrated this Flandrensian holiday 🥳 For us, every day is #EarthDay 🌳🐝🦋🌍

Grand Ducal Guard ⚔️ attacking trash in Italy 🇾🇪 🇮🇹(Note: the trashcan 🗑 was not injured and survived. In fact it’s already oblique since many years so this picture is in scene 😉 . Of course we don’t tolerate any vandalism in Flandrensis and our two Flandrensians knights even took their own trash at home 🚯♻️ ). ... See MoreSee Less

This holiday is for all inhabitants of Flandrensis: happy World Penguin Day 🐧 ... See MoreSee Less

We are 2 days late with this post, but this doesn't mean that we have not celebrated this Flandrensian holiday 🥳 For us, every day is Earth Day 🌳🐝🦋🌍 ... See MoreSee Less