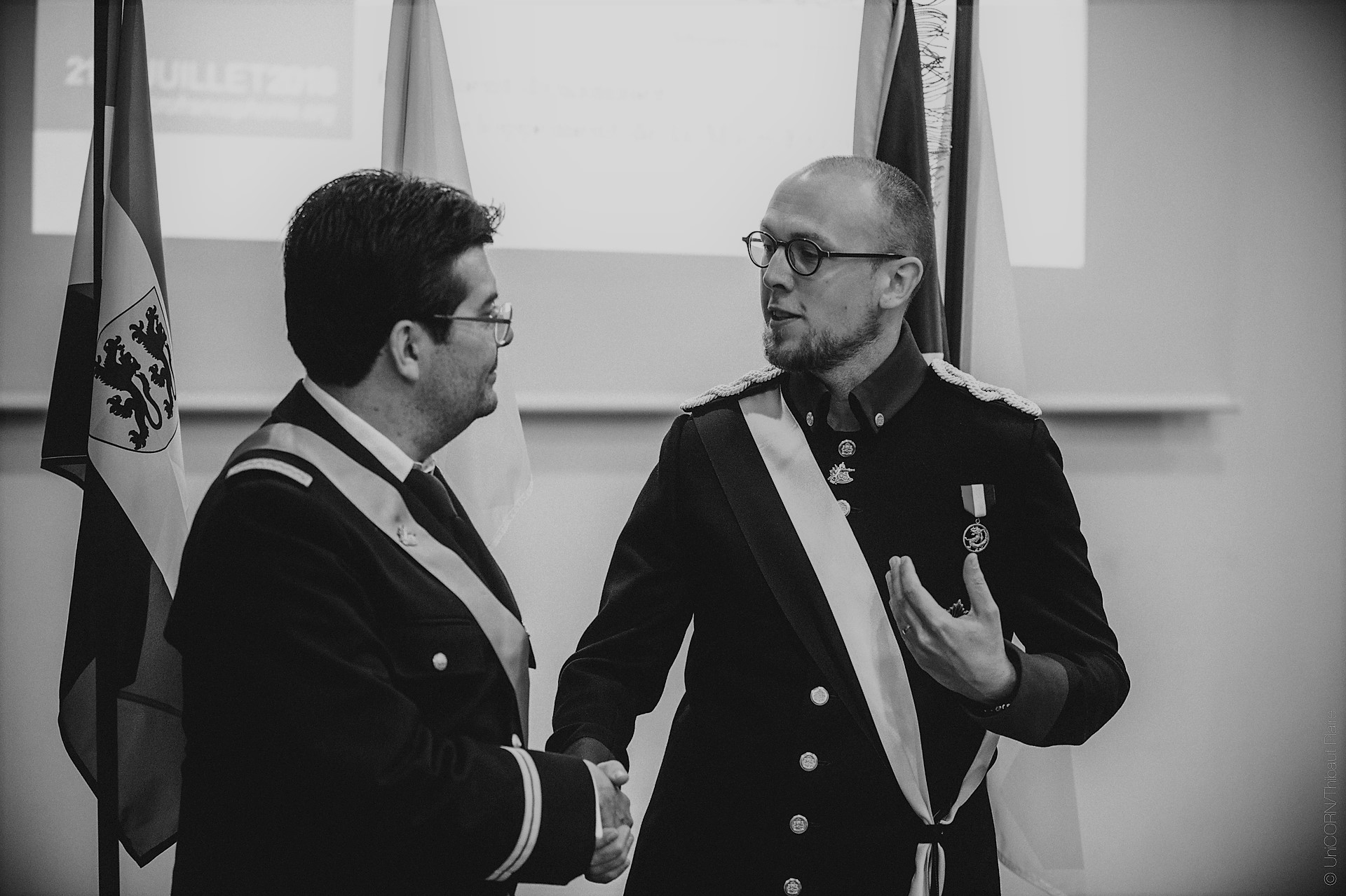 The man behind the project

Nicholas de Mersch d’Oyenberghe (aka Nicholas of Flandrensis) is the founder and the first (and only) head of state of the Grand Duchy of Flandrensis.
As Grand Duke, Nicholas is the face of Flandrensis and the official representative of its worldwide community. He’s the head of the Government and has several constitutional powers like the appointment of ministers or ambassadors, signing treaties, etc. Nicholas is highly involved in the international community of micronations and he’s a frequent guest and speaker at meetings and international conferences of micronations.

At MicroCon 2022 in Las Vegas he was nominated and elected in the Micronational Hall of Excellence, one of the eight individuals with a significant impact on micronationalism the past 250 years.

Within the non-profit “vzw Groothertogdom Flandrensis” Nicholas is the Chairman of the Board of Directors.

Why the title of Grand Duke?

Nicholas holds the title of Grand Duke of Flandrensis but he calls himself “the man behind the project Flandrensis” and never uses his titles outside the micronational community. He started with his micronation in 2008 as a temporary hobby during the holidays without any long term intention. He took the medieval ages as a source of inspiration for his micronation and therefore he chose for it to be a Grand Duchy rather than a republic. In real life Nicholas is not a monarchist, but people know him today as the “Grand Duke”.

Nicholas started Flandrensis in September 2008 but joined the micronational community at the end of that year. Between 2009 and 2011 he was mainly active in the MicroWiki community and represented Flandrensis in several micronational organisations (Grand Unified Micronational, Organisation of Active Micronations, League of Secessionist States, Antarctic Micronational Union, etc.). He became notorious in the community because of the diplomatic dispute with the micronation of Westarctica, which of course ended without any blood or violence. Due to this dispute Nicholas created a reputation for himself as a micronational pacifist and in 2009 he received the Schneider Award, the very first peace award granted by the micronational community. In 2014 the French newspaper “Le Journal du Dimanche” even called him the “Woodrow Wilson of micronationalism”.
Nicholas is also one of the first who introduced the concept of ecological micronationalism and is the co-author of several ecological charters like the “Alcatraz Accords” (Polination Conference, Perugia, 2015) and the “Micronational Declaration on Ecological Stewardship” (MicroCon, Atlanta, 2017, USA).

Grand Duke Nicholas of Flandrensis was born Niels Vermeersch in Belgium in 1988. A product of what is regarded by some as the “golden age of the young micronationalist,” the future Grand Duke founded the Grand Duchy of Flandrensis on 4 September of 2008.

Inspired by the examples of existing nations like Sealand, he began his foray into hobby micronationalism by building a virtual nation drawing heavily upon elements from Flemish culture. It would not be long before the Grand Duke refocused his efforts, claiming a portion of Antarctica and beginning his longstanding advocacy for awareness of the threats posed by climate change.

In the ensuing years, Grand Duke Nicholas has been a vocal champion of conservation, once being referred to as the only micronationalist who doesn’t want to live in his nation. Flandrensis, led by Nicholas, has been at the forefront of climate activism. From letter-writing campaigns to demonstrations, education, and other ecological initiatives, it is regarded by many as a shining example of how to use a nation’s identity to springboard to social action.

In addition to efforts within his own nation, Grand Duke Nicholas is known for investing in young micronationalists and their success. Regulated by a selective but non-exclusionary diplomatic policy, Flandrensis has taken steps to make sure their relations with fledgling nations helps guide them on the path towards success. The Grand Duke was a founder of the first union of Antarctic micronations and has remained a leader in keeping peaceful, productive relations between nations who might otherwise have competing claims and hostile interactions. He actively represents his nation in La MicroFrancophonie despite the fact that he is not a native French speaker. In forums and groups, Grand Duke Nicholas is often regarded as a voice of rationality and diplomacy who is always quick to welcome new participants and direct them to reliable resources to help them get started. Not only is he a vocal and public face in micronationalism, he serves as one of the best known in the community that is not a native English speaker, acting as a gateway figure to large swaths of the world.

His existence as one of the loudest voices for peace, cooperation, and positive change in the world places him amongst the most outwardly-focused members of the micronational community.

Jury of the Micronational Hall of Excellence (MicroCon Las Vegas, 2022)

The fastest way to send questions, comments, concerns, etc. to the Grand Duke: send an e-mail to granduke[at]flandrensis.com or send him a message on Facebook (click here). For citizenship, diplomacy or interviews: please use the correct contact file on this website.

Flandrensis is a micronation with claims over some islands in Antarctica, which was founded in 2008. Flandrensis is not recognized by any country nor is it our intention to be recognized as a one. As an environmental nonprofit organization our message is more important than our self-declared sovereignty.

We believe that Antarctica is one of the few places on this planet to remain relatively untouched by humans and we strongly believe that it should be one huge protected nature reserve only available for scientific research, well beyond the expiration of the Antarctic Treaty in 2048.

vzw Groothertogdom Flandrensis is an environmental non-profit organization that uses the concept of micronationalism to raise awareness for climate change.

It's #PenguinAwarenessDay! 🐧 8 species of penguin live in #Antarctica.

Any change in sea ice can be catastrophic for penguin colonies. If we continue with business as usual, 80% of emperor penguins will be gone by 2100.

We don’t allow any humans on Flandrensis, but did you know our land is inhabited by 10,000 breeding pairs of Adélie penguins (Maher island) and 3,000 emperor penguins (Thurston Glacier)? So let us protect their land #penguinawarenessday 🐧

Job description:In October 2022 Flandrensis – as non-profit – has been granted accreditation as an observer to the governing body of the United Nations Environment Programme (UNEP). In the process...
View on Facebook
· Share

We don’t allow any humans on Flandrensis, but did you know our land is inhabited by 10,000 breeding pairs of Adélie penguins (Maher island) and 3,000 emperor penguins (Thurston Glacier)? So let us protect their land #penguinawarenessday 🐧It's #PenguinAwarenessDay! 🐧There are eight species of penguin living in the subantarctic and Antarctica, including Adélie and emperor penguins.Any change in sea ice can be catastrophic for emperor penguin colonies. But it’s not just emperor penguins that are being affected. On the Antarctic Peninsula, many Adélie penguin colonies have declined by 50-80% since the 1970s.If we continue with ‘business as usual’ greenhouse gas emissions, 80% of Antarctica’s emperor penguins will be gone by 2100, and they will be doomed to eventual extinction. www.asoc.org/learn/changing-life-sea-ice/ #ProtectAntarctica #Antarctica📷 John Weller ... See MoreSee Less