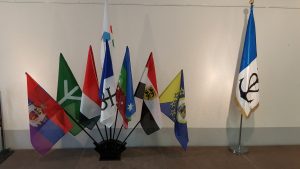 The term micronation, which literally means small nation, is a neologism. A micronation is an entity that claims to be an independent nation or state but is not officially recognized by world governments or major international organizations.
Some micronations are created with serious intent, while others exist as a hobby or stunt and some are the products of megalomania and mental instability. The first reference in English to the word micronation in a popular book appears in 1978, the term has since come to be used also retrospectively to refer to earlier unrecognized entities, some of which date to as far back as the 17th century. The concept of a “micronation” is most closely related to cultural nationalism, and can be broken down into three main categories: role playing, social experiments and political simulations. Often, people assume that those participating in micronations fall within the first category, immediately dismissing the entire concept as a farce. To some, the idea may seem, at face value, childish, ridiculous or even narcissistic, but there exist many micronationalists who go beyond these negative stereotypes. Not every Grand Duke or Empress is out for self-glorification.

But why would someone start his own country? When you have an ideal you can create a non-for-profit organisation, an NGO, a company, a labour Union or even a political party, you’ve got plenty of tools. Micronations, when done cleverly and when done interestingly, they become another tool that people can use to achieve their goals.

Micronations should not be confused with internationally recognized but geographically tiny nations such as Fiji, Monaco, and San Marino, for which the term microstate is more commonly used. Micronations generally have several common features:

The academic study of micronations and microstates is termed ‘micropatrology’. The hobby or activity of establishing and operating micronations is known as micronationalism.

The Grand Duchy of Flandrensis is a micronation with claims over some islands in Antarctica, which was founded in 2008. Flandrensis is not recognized by any country nor is it our intention to be recognized as a one. As an environmental nonprofit organization our message is more important than our self-declared sovereignty.

We believe that Antarctica is one of the few places on this planet to remain relatively untouched by humans and we strongly believe that it should remain a nature preserve only available for scientific research well beyond the expiration of the Antarctic Treaty in 2048.

Flandrensis is an environmental micronation in Antarctica with as motto: No humans, only nature...

On this day, the Grand Duchy of Flandrensis signed a treaty of Friendship & Mutual Recognition with the Republic of Ashukovo #micronation #Flandrensis #Treaty202

On this day, the Grand Duchy of Flandrensis signed a treaty of Friendship & Mutual Recognition with the Vandewal Principality 🖊#micronation #Flandrensis #Treaty201

On this day, the Grand Duchy of Flandrensis signed a treaty of Friendship & Mutual Recognition with the Republic of Ashukovo ✍️ ... See MoreSee Less

On this day, the Grand Duchy of Flandrensis signed a treaty of Friendship & Mutual Recognition with the Vandewal Principality 🖊 ... See MoreSee Less

Proud to welcome a new member in our Diplomatic Corps: H.E. Manuel Noorglo will represent Flandrensis as Consul of Estense 🇮🇹
This region covers three little local towns: Modena, Ferrara, and Reggio Emilia. Some of these places are 40 m under sea level 🌊, as climate activist our new Consul understand the importance of working together against climate change. ... See MoreSee Less

We use cookies to ensure that we give you the best experience on our website. If you continue to use this site we will assume that you are happy with it.OkRead more