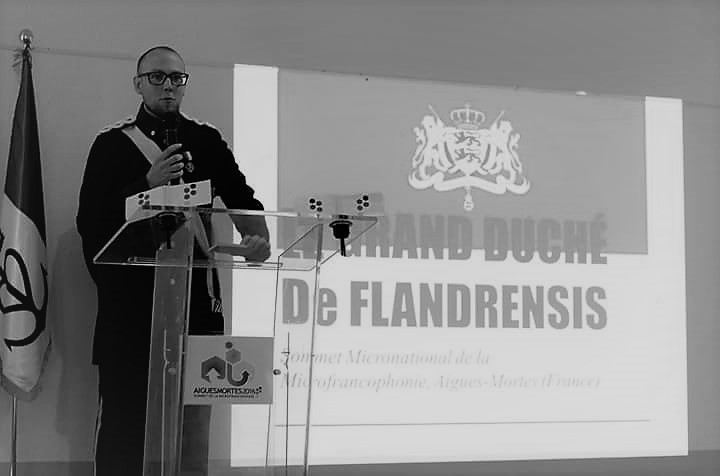 What is a micronation?

For more information about micronations, go to the page “micronationalism”.

So Flandrensis is a fantasy nation?

No! Many imaginary countries or nations exist only on the internet or fictional maps. Those countries are active in online communities only and their claims are located on virtual maps or imaginary worlds. The correct definition for those imaginary countries is Geofiction. There are many similarities between Geoficton and micronationalism. Flandrensis however, is real-life and it organizes ecological events regularly and all goals and achievements in Flandrensis are realistic and executable.

Flandrensis is a micronation, but also a environmental non-profit organisation?

That’s correct. We’re official the “vzw Groothertogdom Flandrensis”,  registered in the “Belgian Official Journal” as a non-profit organisation with number 0772.515.027. The unique concept of micronationalism and our self-declared sovereignty, is simply a creative concept we use to raise awareness for climate change and Antarctica. On 28 October 2022 Flandrensis has been granted accreditation as an observer to the governing body of the United Nations Environment Programme (UNEP).

What actions do you take to raise more attention for the global warming?

We’re not an NGO like Greenpeace or WWF with enough funds to launch huge campaigns. Flandrensis is a micronation/ small non-profit organisation and we remain realistic, but small actions together can make a difference to climate change. We send protest letters to governments or companies who violate environmental agreements in Antarctica (whale hunting, mining, pollution, etc.) or support letters to people and organizations who protect the white continent. In Flandrensis we promote the importance of green energy friendly alternatives, recycling, reducing Co2, etc. and we signed several ecologic charters with other micronations who shares our values. Check our ecological mission for more details.

Most micronations are located on the personal property of the founder, but Flandrensis is in Antarctica. What made you start looking at the Antarctic in the first place?

Firstly, because we searched for a place that doesn’t belong to any country and was uninhabited by people. We could claim everything between 90-150 degrees but a small island was big enough for our plans. We are a group of people who are concerned about global warming and Antarctica is the perfect symbol for it.

What are your plans with your Antarctic territory?

What made Flandrensis unique is that we’re the only country in the world that doesn’t want people on its territory! Antarctica is one of the few places on this planet to remain relatively untouched by humans and we strongly believe that it should remain a nature preserve only available for scientific research well beyond the expiration of the Antarctic Treaty in 2048. The territorial claims of the Grand Duchy of Flandrensis are a statement to the international community: to raise awareness for climate change.

So, you don’t have any plans to colonize Antarctica?

Our motto is: “No humans, only nature”!

What about Westarctica, the other Antarctic micronation?

For more than 10 years Flandrensis and Westarctica are close micronational partners. Although our relationship didn’t start well: in 2009 there was a territorial conflict (it was even mentioned in a Dutch travel magazine), which of course ended without any blood or violence (and no, we never commanded any secret penguin armies in battle …). With the West-Antarctic Treaty , signed on September 24, 2010 both micronations reached a diplomatic agreement: Westarctica recognized the sovereignty and territorial claims of Flandrensis, in return Flandrensis recognized all the rest of Mary Byrd land as Westarctican territory. There are also other micronations with Antarctic claims, but Flandrensis and her Westarctican ally both focus on the environmental protection of the continent.

Are your Antarctic claims legal?

From our view, yes. The Antarctic Treaty prevented any new claims on Antarctica by countries but the treaty didn’t mention claims by individual persons. So, the founder claimed the islands in his personal name and sent letters to the United Nations and to the nations who signed the Antarctic Treaty to inform them of his claim, thereafter he grants his islands to the Grand Duchy. The territorial claims of the Grand Duchy of Flandrensis are a statement to the international community: Antarctica is one of the only places on earth that is not continuously inhabited by human beings and we want to keep it that way!

Your name and symbols have no references to the white continent. Why not the Grand Duchy of Siple Island with a penguin in the flag?

That’s true. Flandrensis was originally founded in 2008 by a history student as a temporary hobby for two weeks. With the first sketches, he searched for inspiration in medieval history and not in Antarctica. However, weeks turned into months, months into years and thanks to many enthusiastic people, Flandrensis developed into an environmental project. In 2016 the government organized a referendum to change the name and national symbols, but the majority voted to keep everything.

Which countries have established diplomatic ties with Flandrensis?

Flandrensis has not sought to establish formal bilateral relations with any other state, and does not intend to do so. Our message is more important than our self-declared sovereignty. But Flandrensis is worldwide active in the micronational community and since its foundation Flandrensis signed more than 200 treaties of friendship and mutual recognition with other micronations. As far as we know, we have the world record in micronational diplomacy.

What kind of name is Flandrensis?

The micronation is primarily inspired on the medieval Flemish history. “Pagus Flandrensis” is the oldest Latin name of Flanders (8th century) and means “overflow, flooding”.

What is the symbolism of the Flandrensisian national symbols?

For more information about micronations, go to the page “National Symbols”.

So Flandrensis is a mix of ecologic and medieval elements. Is Flandrensis a feudal state?

No, we’re a constitutional monarchy but we integrate several medieval elements that are part of our national heritage. Every citizen has the right to his own coat of arms and we have our own Order of Knighthood: the “Order of the Melting Mountain” that is dedicated to people who protect our white continent.

Why is Flandrensis a monarchy? Are you a community of royalists?

Not at all. The founder took the medieval region of Flanders as a source of inspiration for his micronation: name, symbols, heraldry, etc. To keep the feudal system, he chose for a Grand Duchy instead of a republic.

Can I have a title of nobility if I join your micronation?

If that is your intention to join Flandrensis the answer is: no! Title collectors are not welcome in our micronation. The Grand Duke of Flandrensis only awards titles to citizens as a sign of appreciation and respect for their efforts and contributions toward the nation or the environment.

Are your titles of nobility real?

Our titles have only a value in the community of micronations. Nobility is as a medieval aspect part of our cultural tradition but in Flandrensis there is no place for ego’s. Our citizens don’t use their title outside micronationalism, not even the Grand Duke.

What is the national language(s) of Flandrensis?

What is the national anthem of Flandrensis?

“Long live Flandrensis” was composed in 2015 by Anil Altinsoy of the Conservatorium of Izmir. The song symbolizes multiculturalism, diversity, Antarctica and nature. Our national anthem has no lyrics because there are no humans in Flandrensis to sing …

What is the population of Flandrensis?

How can I become a Flandrensian?

Those wishing to apply for Flandrensisian citizenship can complete and submit our online application form. Participation is encouraged but not required. We have available jobs, but no one is required to take one.
There is also an alternative procedure to make new citizens: since 2008 there were 19 babies with both parents being a Flandrensian citizen.

What does it cost to join?

There is no charge to become a citizen of Flandrensis and you don’t need to pay taxes.

Can I get an official passport of Flandrensis?

No! There are a lot of examples of micronations who produced professional looking documents as novelty souvenirs, but were later victims of criminals who sold them to ignorant refugees as passports from real existing countries. Or even worse, a few so-called “micronations” that welcomed refugees with these falsified documents just to make money… It is cruel to give those people false hope, they have lost everything already. Applications with the request to have such documents will be ignored.

Where can I meet other Flandrensians?

If you are registered as a citizen you are welcome to join the Facebookgroup “We are Flandrensians”. Ministers and diplomats also have access to the official Discord.

Flandrensis is a micronation with claims over some islands in Antarctica, which was founded in 2008. Flandrensis is not recognized by any country nor is it our intention to be recognized as a one. As an environmental nonprofit organization our message is more important than our self-declared sovereignty.

We believe that Antarctica is one of the few places on this planet to remain relatively untouched by humans and we strongly believe that it should be one huge protected nature reserve only available for scientific research, well beyond the expiration of the Antarctic Treaty in 2048.

vzw Groothertogdom Flandrensis is an environmental non-profit organization that uses the concept of micronationalism to raise awareness for climate change.

Building a composter with your son, that's also the Flandrensian spirit 💚
G. Füleki 🇭🇺: "The goal was not only to reduce waste, but also to teach my son about recycling, the zero waste principle, at a young age."👏 #micronation #ActOnClimate

🐟 @USFWS declared #Antarctica’s emperor penguin 🐧 threatened with extinction, as melting sea ice upends the habitat it needs to breed, feed and protect itself from predators.

We urge #CCAMLR to take action to #ProtectAntarctica and its wildlife!
https://www.washingtonpost.com/climate-environment/2022/10/25/emperor-penguins-threatened-extinction-climate/

Building a composter with your son, that's also the Flandrensian spirit 💚H.E. Count Gábor Füleki, Ambassador to Hungary: "The goal was not only to reduce waste, but also to teach my son about recycling, the zero waste principle, at a young age. Plus, this will go under the fruit trees that we will plant in the spring!" 👏 ... See MoreSee Less

Together with the Royal Republic of Ladonia Flandrensis is co-organizer of the subevent MicroCon 2023 in Europe. For those who are interested to attend MicroCon EU on 12/08/2023 in Ypres (Belgium) 👇 ... See MoreSee Less

When this happens, it's usually because the owner only shared it with a small group of people or changed who can see it, or it's been deleted.
View on Facebook
· Share

This has to be a cool teacher 🤩. Explaining the basic concepts of the political structure of a state, he used Flandrensis as an example from which the students can imagine how their ideal state would be. Let's hope there are some future micronationalists in that classroom 😎 ... See MoreSee Less